Showing posts from May, 2017
Show all

How NOT to Avoid "Talking Politics" 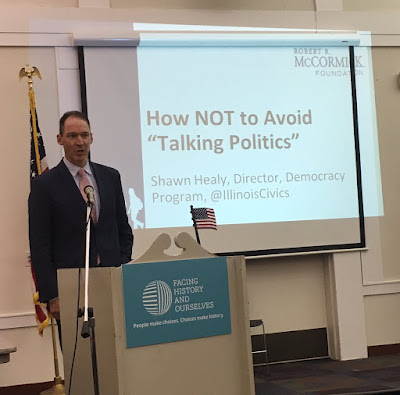 by Shawn P. Healy, PhD, Democracy Program Director
Last Tuesday, I had the honored of speaking at a community forum in Chicago’s 47th Ward sponsored by partner and grantee Facing History and Ourselves. It was titled “How NOT to Avoid ‘Talking Politics’,” and my remarks are excerpted below.


According to Hill’s Manual of Social and Business Forms, a guide to writing and etiquette from 1879, we should “…not discuss politics or religion in general company. You probably would not convert your opponent, and he will not convert you. To discuss those topics is to arouse feeling without any good result.”

Today’s program will test the wisdom of this time-honored adage.

The truth is that most of us don’t discuss politics at all, and when we do it’s with people that share similar ideological views. These like-minded conversations can lead to ideological amplification, where there is even less diversity in political opinions on the issues of the day post-deliberation. 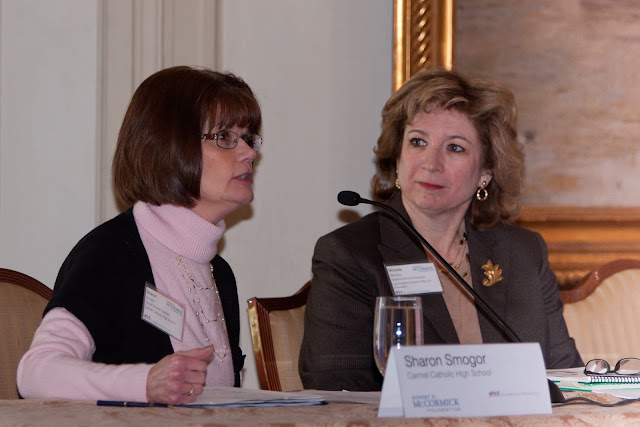 by Shawn P. Healy, PhD, Democracy Program Director
Today marks the end of a teaching career that has spanned 43 years and sparked the civic development of generations of students. Carmel Catholic High School Social Studies Teacher Sharon Smogor is set to retire, and it’s with mixed emotions that I write this tribute to her legacy in Illinois’ civic learning lore.


Sharon’s involvement with the McCormick Foundation preceded my own. She was a member of the teacher advisory council convened by the Bill of Rights Institute to help develop the Freedom Museum and design a curriculum that complimented student visits. The Museum opened in 2006 and served thousands of students in its three years of operation. The exhibit was later adapted to a mobile museum, Freedom Express, that traveled to schools throughout Chicagoland, Carmel Catholic included.

Since 2006, the McCormick Foundation has provided professional development opportunities for Illinois teachers, and Sharon was a staple in demons…
Post a Comment
Read more

Review: You're More Powerful Than You Think 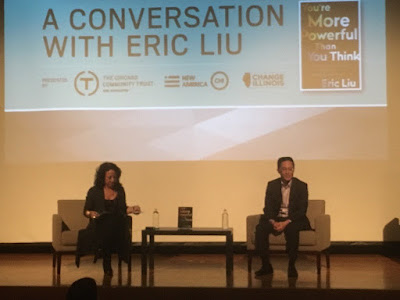 by Shawn Healy, PhD, Democracy Program Director
Thanks to our friends at the Chicago Community Trust, fellow supporters of the #CivicsIsBack Campaign, we were invited to a program featuring Eric Liu and his new book, You’re More Powerful Than You Think, at the Chicago Cultural Center last month.


I’ve had the privilege of knowing and working with Eric for the past several years through his leadership of the Civic Collaboratory, self-described as a national “trans-partisan” group broadly committed to civic empowerment. Civic education has long had a seat at the table, and Eric has lent his hand specifically to promoting “action civics,” best embodied locally by the Mikva Challenge.

You’re More Powerful Than You Think contains a number of important lessons transferrable to the civics classroom.

Power lies at its center, and is defined as “...the capacity to ensure that others do as you would want them to do.” Liu then pivots to three power axioms:
“Power concentrates”“Power justifie…
Post a Comment
Read more 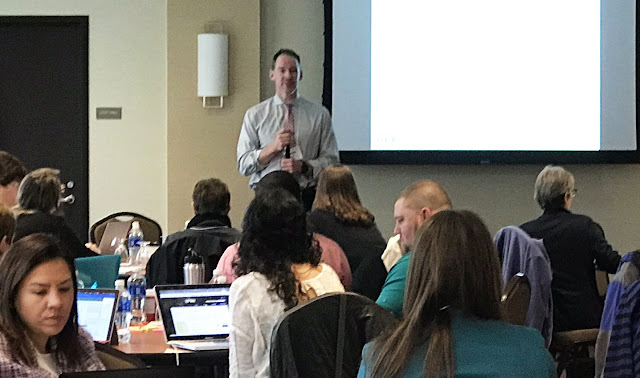 by Shawn Healy, PhD, Democracy Program Director
Since the inception of our #CivicsIsBack Campaign to support implementation of the new high school civics course requirement, the emerging Illinois Social Science Standards have served as a backdrop to this work. Specifically, the grades 9-12 civics strand frames the content and pedagogy to be used in the stand-alone, semester-long course.

Yet the standards are K-12 in scope and span the social sciences, including economics, financial literacy, geography, and history. With official implementation set for this coming fall, we have our work cut out for us in leveraging an opportunity to return the social sciences to their rightful seat at the core content table. The standards also promise to transform teaching from didactic instruction to student-directed inquiries, ultimately resulting in students communicating conclusions and taking informed action.

Thankfully, the McCormick Foundation is not alone in this work, as the standards wer…
Post a Comment
Read more 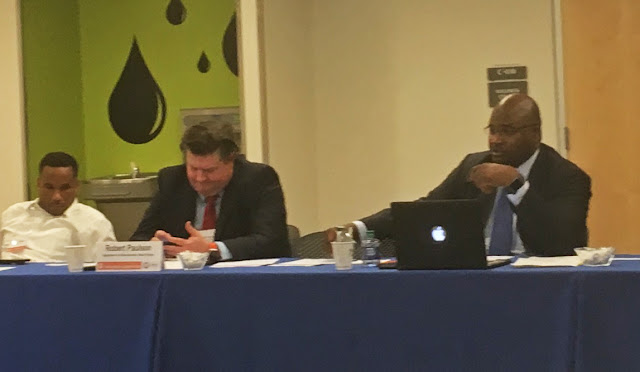 by Shawn Healy, PhD, Democracy Program Director
Earlier this week, I had the honor of attending and presenting at the Civics Education Leadership Team Meeting convened by the Council on State Governments (CSG) in Lexington, KY. In partnership with the National Center for Learning and Civics Engagement, CSG brought together representatives of all three branches of government from states throughout the country, including Illinois Representative Elgie Sims (D-Chicago); state civic education advocacy leaders; and experts on youth civic development (see the agenda and list of attendees).

A panel presentation by Center for Information Research on Civic Learning and Engagement (CIRCLE)Director of Impact Abby Kiesa struck a chord with me and is the basis of today’s post.