Showing posts from October, 2018
Show all

by Sonia Mathew, Civic Learning Manager
The Learning Policy Institute recently published a research brief in September 2018, titled “Educating the Whole Child: Improving School Climate to Support Student Success,” by Linda Darling-Hammond and Channa M. Cook-Harvey. As a key element of Democracy Schools is “school climate,” I was excited to read more about their findings and connect their ideas to strengthening civic learning in schools.

The research brief examines, “how schools can use effective, research-based practices to create settings in which students’ healthy growth and development are central to the design of classrooms and the school as a whole.” The report explores findings related to the science of learning and development, school practices that should come from this science, and policy strategies that can support this work on a wider scale.

Related to the science of learning and development, a key finding from the report that connects to our work in civic learning…
Post a Comment
Read more

How Should We Live Together? 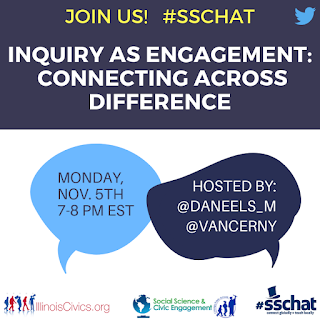 by Mary Ellen Daneels, Lead Teacher Mentor
As we return to the classroom this week, once again we will create a safe civic space to help students process a national tragedy. As I struggled to articulate my thoughts and role in responding, a friend eloquently posted, “My heart breaks for the families of the 11 killed in the Tree of Life Synagogue yesterday. It is especially cruel that these people were killed in the name of hate and in a place that should be sacred. I will continue to work to erase hate and promote understanding”

Another friend replied with a charge for all of us in the classroom, “As we search for ways to react meaningfully, Social Studies educators have a special opportunity. Our classrooms are the homes for students to learn empathy, respect, [and] how to listen to others with understanding.”

Conceal and Carry in Schools? An Opportunity for Service Learning 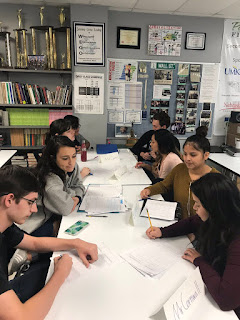 by Mary Ellen Daneels, Lead Teacher Mentor
One of my most fundamental responsibilities as a teacher is to keep my students safe. This blog has, on numerous occasions, discussed how to create a classroom that is safe, equitable, and inclusive for all learners. We have also processed how to create safe civic spaces to help students process current events in troubling times. We have yet to address how to keep our students safe from school violence?

Barbara Laimins, the #CivicsIsBack Mentor Liaison, recently attended a local school board meeting where the membership was deliberating whether they would endorse a resolution being presented at the upcoming IASB Joint Annual Conference to allow individual districts to choose whether they want to arm faculty members as part of a student safety and protection plan.

The exact language of the Student Safety and Protection Resolution from Mercer County CUSD 404 that will be voted on at the upcoming conference, November 16-18, 2018, is as foll…
Post a Comment
Read more 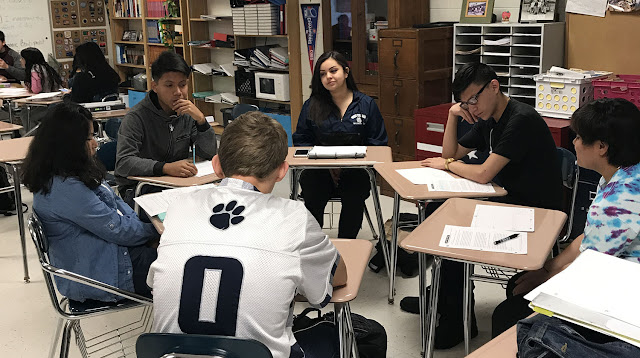 In recent blog posts, Shawn highlighted compelling data analyzing the impact the #CivicsIsBack initiative has had on bridging the civic empowerment gap in the state of Illinois. While the results are encouraging, there are still important questions to tackle in order to meet the need of ALL learners in the civic classroom. One of these questions is, What are some strategies or resources that can be used to support students of varying reading levels in conducting research and building background knowledge to participate in civic inquiry?

In an article documenting a study of the literacy challenges faced by students and teachers in an advanced, project-based version of the US Government and Politics course, Dr. Walter Parker and Dr. Shelia Valencia from the University of Washington stated that: 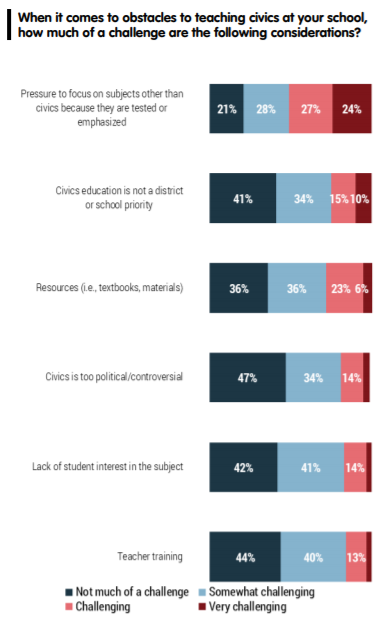 by Shawn P. Healy, PhD, Democracy Program Director
In June, I recapped an administrator academy that Lead Teacher Mentor Mary Ellen Daneels and I delivered for Springfield (IL) Public Schools. The academy was designed to build greater support for school-based civic learning among administrators, familiarizing them with new state policies impacting civics, but also making the empirical case for doubling down on civic learning.

Education Week has increased its coverage of civic learning in the wake of the 2016 Election and Parkland tragedy earlier this year. This spring and summer, respectively, they conducted and reported on a national survey of school leaders’ views on civic education (n=524). More than half of school leaders (52%) said that their schools provide “too little” civic education. The remaining 48% said there was just the right amount (one administrator said there was “too much”).

Closing the Civic Empowerment Gap through the #CivicsIsBack Campaign 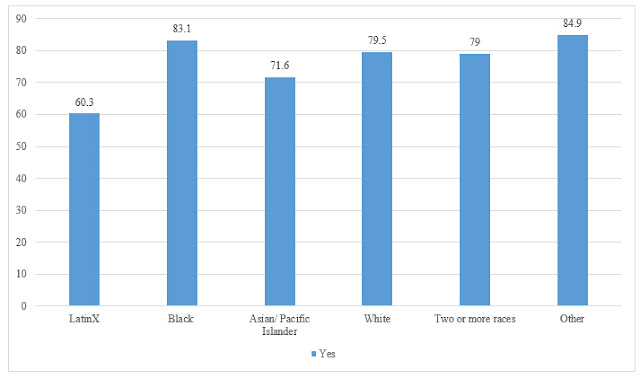 by Shawn P. Healy, PhD, Democracy Program Director
In August, we published a three-part series analyzing year two evaluation data of Illinois’ statewide civics course implementation plan provided by the Center for Information Research on Civic Learning and Engagement (CIRCLE). The first piece provided a broad overview of the findings, and the second did a deep dive on the results of our Illinois Civics Teacher Mentor program.

The concluding post further analyzed the student outcomes data derived from more than 3,000 Illinois high school students that completed surveys during the 2018-2019 school year measuring their exposure to proven civic learning practices and a stand-alone civics course, along with related civic dispositions and behaviors.

These students attended schools affiliated with teacher mentors and span from the suburbs of Chicago and St. Louis to rural communities throughout Central and Southern Illinois. And they are broadly representative of the state’s student pop…
Post a Comment
Read more

October 03, 2018
by Mary Ellen Daneels, Lead Teacher Mentor
In a previous blog post, I shared resources to understand the U.S. Supreme Court confirmation process and earlier this week, Shawn shared why the Kavanaugh hearing is a pivotal moment in our nation’s history, explaining that, “The midterm elections are an important backdrop to the Kavanaugh confirmation process, as Democrats have an outside chance of taking control of the Senate, and with it vetting future presidential nominees. Should Kavanaugh not be confirmed and the Senate falls to Democrats, the clock is running out on Republicans to appoint a like-minded conservative.”

Beyond understanding the importance of the 2018 midterm elections and the system of checks and balances that scaffold the appointment process of federal judges, the Kavanaugh hearings have provided classrooms an opportunity to engage in current and controversial issue discussions related to power, justice and equity.

The Kavanaugh Nomination: A Pivotal Moment in Our Nation's Political Life

October 01, 2018
by Shawn P. Healy, PhD, Democracy Program Director
A month ago, my colleague Mary Ellen Daneels previewed the U.S. Supreme Court confirmation process for Judge Brett Kavanaugh, sharing a plethora of classroom resources ripe for immediate use. Little did we know of the dramatics that would follow.

Kavanaugh was a fairly conventional nominee for a Republican President that vowed to select individuals vetted by the conservative Federalist Society. He did have a significant paper trail given his previous service as a lawyer in the Bush Administration, but twelve years on the federal bench and an Ivy League education placed him on par with his presumptive peers on both sides of the ideological spectrum.

However, history suggests that some of the most contentious nominations center on the ideological positioning of the Justice being replaced in relation to the nominee. In this case, Justice Anthony Kennedy, the swing vote on an otherwise evenly divided Court, decided to retire in June, o…
Post a Comment
Read more
More posts