Showing posts from December, 2018
Show all

by Mary Ellen Daneels, Lead Teacher Mentor While the last remaining days of 2018 are slipping away and many of us are looking forward to a well-deserved holiday break — the end of the year also marks a time of new beginnings. The new year brings with it a fresh start and resolutions for improvement both in and out of the classroom. One of my favorite non-civics-related podcasts is “ Happier ”, hosted by bestselling author Gretchen Rubin and her sister, T.V. writer Elizabeth Craft . I find the podcast gives me practical tips to embrace habits that help me be, well, “happier” in both work and play. On their most recent podcast , they reflected on their resolutions for 2018 and started creating their “19 for 19” — a list of 19 items they would like to complete upcoming year. As you contemplate the new year, what is on your list? Are there new strategies related to the proven practices of civic education you would like to try? Is there a new lesson plan you would like to e
Post a Comment
Read more

Teach like our democracy depends on it — because it does: #NCSS18 recap 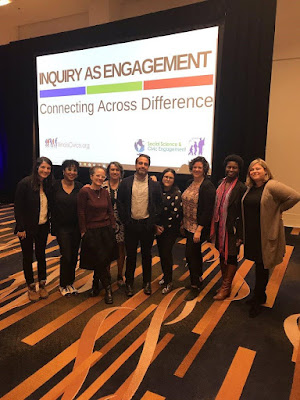 by Mary Ellen Daneels, Lead Teacher Mentor Earlier this fall, I was part of a conference put on by Dr. Diana Hess , the Dean of Education at the University of Wisconsin-Madison. The conference t-shirts read, “Teach like our democracy depends on it — because it does.” The recent 98th Annual National Council for the Social Studies conference held in Chicago highlighted this message throughout. IllinoisCivics.org and the Department of Social Science and Civic Engagement at Chicago Public Schools hosted a special strand of Illinois programming around “Inquiry as Engagement: Connecting Across Differences” had the message, <strong>“Engage students like our democracy depends on it — because it does.”</strong> Session attendees learned how deliberation, student voice, and informed action can be leveraged to connect classrooms across cultural, geographic, and socioeconomic differences in this diverse state to promote culturally sustainable teaching. The day concluded wit
Post a Comment
Read more

Scholastic Journalism Endangered in Chicago and Other Underresourced Districts

by Shawn P. Healy, PhD, Democracy Program Director On November 1-4, 2018, the Journalism Education Association hosted its semiannual convention in Chicago . More than 6,000 student journalists and their advisers attended, including a cohort of Chicago Public Schools students and teachers sponsored by the Chicago Scholastic Press Association , an affiliate of Roosevelt University and longtime McCormick Foundation grantee. Sessions were standing room only and enlivened by enthusiastic student journalists. However, the lack of racial diversity among conference attendees was stunning, especially in a city where students of color compose 90% of CPS’ enrollment, not to mention a majority of K-12 students statewide. Scholastic journalism is vital to the civic mission of our schools and serves as an important pipeline into the journalism profession, where people of color are also vastly underrepresented . The 2011 Scholastic Journalism Census produced by the Center for Scholastic Journal
Post a Comment
Read more
More posts